If you have bats in your chimney, and not in any other part of the house or attic, the situation is a little easier, because the bats are confined to one small area. Before discussing bat removal tactics, there are two very important things to keep in mind!

MAKE SURE THE DAMPER IS SHUT – So that bats don’t get into the house and start flying around once you do your bat exclusion.

DO NOT START A FIRE – You will have to open the damper to start a fire, and when you do, bats will get inside the house. If you start a fire, for some reason many bats crawl down and fly out the bottom rather than the top. Plus, many bats would die, and to kill bats is illegal and inhumane. Plus, bats can fit through very small areas, and you may find bats in the attic and walls if you start a fire. 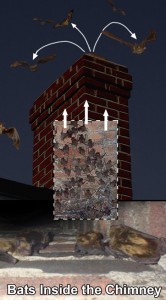 The same principles apply for getting bats out of chimneys as for getting bats out of a house, or any other type of building or structure. You have to find the exit point, and properly install a one-way exclusion device over it. You can’t, unfortunately, just let the bats fly out at night and then install a chimney cap. Not all of the bats go out at once. You need to install exclusion devices that let the bats fly out, but not back in.

Luckily, finding the exit point is easy – it’s the big hole at the top of the chimney! Or is it? Many of the cases of bats in chimneys that I see are actually the result of bats going in through gaps at where the chimney meets roof, or in decayed and open areas. Bats don’t always like to go through a big, vertical hole. They like small horizontal gaps best. So it pays to do a full bat inspection to find out exactly where they are going in and out. A night watch helps a great deal. Even if you know you’ve got bats crawling about and making noises in the chimney flu, you might observe the bats flying out of areas you didn’t expect.

If they’re coming out of the top of the flu, you need to pay special heed to leaving a gap above the exclusion netting, so that they can fly up, then around and out the bottom of the exclusion netting. It’s pretty hard to set up properly. I honestly recommend hiring a professional bat removal company if you’ve got a colony living in your chimney.

Oh, and one other thing – of course, if you’ve got a colony of bats in the chimney, it’s a maternity colony of female bats. They give birth to their pups in May, and the young bat pups are unable to fly until mid-August (timing varies a bit by species and part of the country) so PLEASE do not remove bats from the chimney during these summer months, known as the maternity season. Do it before, or wait until the young can fly in August. If you do an exclusion during the summer, the baby bats will be stuck inside, and I’ve seen so many problems with baby bats in the summer, it’s crazy. Without their mother, they crawl all over the place, and get into the house.

If you don’t feel comfortable with removing the bats yourself, please give us a call.

Trackback from your site.

Located in Fort Atkinson, Wisconsin, we’re the chimney experts for over 35 years. We are available 24 hours a day, 7 days a week.

Wisdom from the Hearth Chimney Safety Institute of America

Wisdom from the Hearth

The Blog of the Chimney Safety Institute of America

Ask Russ – Fielding Homeowner Questions. It’s the end of “winter” and you’re not planning to utilize your fireplace. What kind of maintenance do you need to have done to your system? Get your chimney swept and inspected by a Certified Chimney Sweep® in the spring or summer. Why? Take a listen. (hint: it’s the best … More Ask Russ: After Burning Season Maintenance
Posted: February 6, 2019, 3:58 pm

Ever want a digital copy of the Successful Chimney Sweeping manual? How about digital copies of CSIA homeowner brochures allowing you virtually unlimited printing? CSIA is excited to announce we’re taking the digital leap with our manuals and publications. The Successful Chimney Sweeping manual (the current 2011 edition and the forthcoming 2019 manual) and the … More Homeowner Safety Brochures, All CSIA Publications Available Digitally
Posted: January 28, 2019, 1:15 pm